On Monday, April 19, the Bargaining Committee reached a tentative agreement with the University. If approved as our first contract, the University’s final proposal package would codify important economic improvements, strengthen equity and inclusion at Columbia, establish numerous workplace rights for student workers, and create a foundation for a strong union moving into the future.

The Bargaining Committee recommends to vote YES on the tentative agreement reached with the University. We reached the decision to recommend as a committee in a 7-3 vote.

The ratification vote will be conducted
from Wednesday, April 21, 9 AM ET
to Friday, April 30, 5 PM ET. 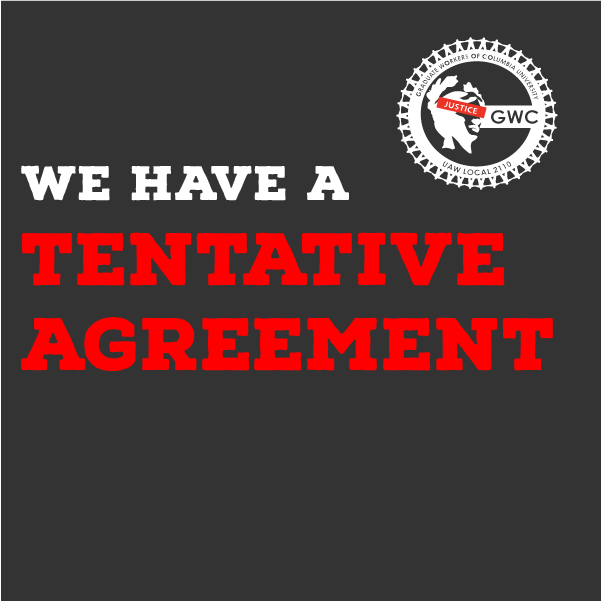 What is the contract ratification vote?

The contract ratification vote is a vote for all bargaining unit members to democratically determine whether or not to accept the terms of the agreement that has been tentatively agreed to by the University and the Union’s elected Bargaining Committee. A simple majority of those voting determines the outcome of the vote. However, for the vote to be representative and powerful, it is critical for a supermajority of student workers to participate.

Who is eligible to vote?

If you do not satisfy the eligibility criteria but wish to participate in the vote, you will receive a challenged ballot. Challenged ballots are resolved and counted only if their number is determinative of the outcome of the vote.

What happens if the result of the vote is Yes (to ratify the contract)?

If a majority of those voting accept the tentative agreement, the new contract would take effect upon the conclusion of the ratification vote. Compensation increases would take effect on August 1, and all PhD workers in years 1-7 on 9-month appointments would get a $1,000 COVID relief this summer.

What happens if the result of the vote is No (not to ratify the contract)?

If a majority of voters vote NO, the offer from the University would not be approved as a new contract. We would then return to negotiations. and would certainly attempt to reproduce the terms that were offered today; however, Columbia might not uphold all of our prior tentative agreements, and it is likely that we would not achieve the same or a better offer without significant additional mobilization.

What platform will be used for the vote?

We will use ElectionBuddy. This electronic platform guarantees secrecy of ballots and makes sure that no one can vote more than once.

You should receive an email from ElectionBuddy with your ballot on Wednesday, April 21, 9 AM ET or soon after you sign a union card if the vote has already begun. Please check your spam, junk, and promotions folders if you cannot locate your ballot right away.

What if I cannot locate my ballot?

If you cannot locate the email from ElectionBuddy with the ballot, including in your spam, junk, and promotions folders, email us at columbiagradunion@gmail.com.

What is the quorum for the vote? How is the outcome decided?

There is no quorum for the vote and a simple majority decides the outcome. However, for the vote to be representative, it is crucial that the majority of student workers participate.

When will we know the results?

We will know the results shortly after the vote is closed on Friday, April 30, at 5 PM ET. Everyone can attend the ballot count via Zoom (more details will be provided soon).

Who oversees the ratification vote?

Similar to Strike Authorization Votes, ratification votes are overseen by elected leadership of the Local and/or the unit, for example, the Bargaining Committee.

Why was the timeline for the vote chosen this way?

There is no minimum period of time required, but we do want to give everyone a reasonable opportunity to vote. We wanted to provide everyone with an opportunity to cast their ballots in a timely manner, while providing time for deliberation and discussion. If you are unsure about your vote, take time to look through the links above and/or talk to your department organizer(s), and you can cast your ballot at any point while the vote is open.