In January 2014, graduate student workers at Columbia started talking about unionizing—to have a say in decisions that affect our work at the university and to improve the conditions of our labor. A few months earlier, after eight years of sustained organizing, grad workers at New York University (NYU) had finally won back recognition of their union, Graduate Student Organizing Committee-UAW (GSOC-UAW), and we were excited and energized by their victory. What started as informal conversations among peers within our own departments began to coalesce into a movement when we realized that our colleagues across campus were having similar conversations.  Grad student workers reached out to UAW representatives, who had been involved with past organizing campaigns at Columbia and the current campaign at NYU, as well as at other universities across the US.  We held an open meeting, and grad workers from numerous departments attended.

We soon discovered that grassroots support for unionization ran much deeper and wider. We started having face-to-face conversations across the Morningside and Medical campuses, and word spread quickly: by May we held a packed town-hall-style meeting, with grad workers from more than 30 departments across the sciences, medical campus, humanities, and social sciences in attendance.  Sustained organizing continued through the summer. By the end of June, we had active participants in virtually every department at Columbia. In the dead of July, we held another packed town hall, this time at the Medical Center campus.

Majority of RAs and TAs Sign Up for GWC-UAW

Fighting for the Legal Right to Collective Bargaining at the NLRB

Our original petition to the NLRB was dismissed in February 2015 by the regional office, which did not have jurisdiction to overturn the 2004 Brown ruling. According to Brown, a partisan Bush-era decision that graduate student workers at private universities did not have the right to collective bargaining, even though our colleagues at more than 60 public universities across the US do enjoy that right and have bargained union contracts for decades. We appealed to the federal NLRB in Washington, DC. On March 13, the federal board instructed the New York board to hear our petition and begin collecting evidence about our working conditions. Regional NLRB hearings concluded in March 2015.  On October 23, 2015, the NLRB regional director again dismissed our petition, based on Brown, but wrote a decision suggesting strongly that the evidence from the hearings demonstrated that RAs and TAs were “employees.”  On December 23, 2015 the Board issued an order granting review of our case and to consider whether or not to overturn Brown.

Huge Victory at the NLRB!

On August 23, 2016, the Board issued a historic decision overturning Brown and restoring our statutory right to collective bargaining. This decision not only enables RAs and TAs at Columbia to have an election on unionization as early as Fall 2016, but also sets precedent for RAs and TAs at private universities across the United States to form unions and engage in collective bargaining.  We expect the NLRB to hold an election during Fall 2016.  If a majority of participating RAs and TAs vote “yes” in that election, Columbia would have a legal obligation to bargain with GWC-UAW.

“Columbia can do better!” Organizing for and Winning Improvements on Campus

Throughout 2015 and 2016, as we waged our legal battle at the NLRB to restore union rights, GWC-UAW remained active on the ground and dedicated to continuing the grassroots organizing that has made our campaign so successful thus far.  In the process, GWC-UAW has launched a number of initiatives and worked alongside other organizations, such as the Graduate Student Advisory Council (GSAC), to help win improvements to pay, fee waivers and family benefits.

Finally, GWC-UAW has helped show that Columbia can, and does, do better when we join together across campus.  Working alongside efforts by GSAC and other student groups, GWC-UAW organizing helped move Columbia to promise four years of pay increases, enhance family benefits and expand them to more programs, and win more years of funding in programs that lagged behind the best practices across campus.

Support from our Allies among Elected and Community Leaders 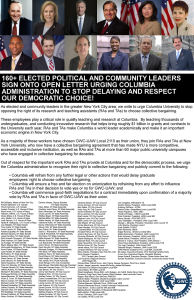 Along the way, GWC-UAW has also received an outpouring of support from elected and community leaders who have called on Columbia to do the right thing and respect our democratic right to choose unionization.  In December 2015, hundreds of GWC-UAW supporters rallied and delivered an open letter signed by more than 160 elected and community leaders urging Columbia to “Respect our Democratic Choice.”  More recently, on September September 26, 2016, dozens of Congressional leaders from across the US signed a statement applauding the NLRB decision and urging private university administrators “to ensure a climate that ensures free and fair elections.”  GWC-UAW also received a boost of support from US Senator Bernie Sanders and NYC Mayor Bill De Blasio.

Fall 2016: Preparing to Win our NLRB Election and Bargain a Strong Contract

More than 3,000 RAs and TAs have now signed cards and weighed in on initial bargaining surveys as we approach our NLRB election.  The vigorous participation and activism across campus has built a solid foundation to win our election with a strong “yes” vote so that we have momentum to bargain improvements in a strong first contract.  GWC-UAW has held several town halls since early Fall 2016, as well as a major forum on how unionization can enhance the ability to take on sexual harassment.  We will continue to hold such events in order to make sure all RAs and TAs have the opportunity to ask questions about unionization, get involved and meet their colleagues from across the university.

A Brief History of Graduate Student Organizing in NYC

1998 Grad student workers at NYU start organizing and a majority chooses to be represented by GSOC-UAW Local 2110.

2000 GSOC-UAW wins a landmark National Labor Relations Board (NLRB) ruling, affirming that grad student workers have bargaining rights, and a majority vote for GSOC/UAW as a union.

2002 Grad student workers at NYU ratify their first contract, including a 38% increase to minimum stipends, workload protection, and paid health care for the first time, among other improvements

2001-2002 Grad student workers at Brown, Tufts, Penn, and Columbia organize and have elections run by the regional NLRB. However, their ballots are impounded because universities—in a coordinated anti-union strategy—appeal regional labor board decisions to the NLRB.

2004 The NLRB, comprising new appointments following a change in administration, rules on the Brown University case, overturning the original NYU decision and stripping grad student workers, from private universities, of their right to collective bargaining. All four cases are dismissed and all ballots destroyed.

2005 When the first GSOC/UAW contract expires, NYU uses the Brown decision to withdraw recognition of the union and refuses to bargain a second contract.

2014 Grad student workers increase and expand efforts to organize unions at Columbia, the University of Connecticut, The New School, Harvard, and Cornell, as well as revived efforts at Yale. In addition to graduate workers, there are increased efforts by adjunct faculty and university athletes to organize unions.

On December 12, 2014, based on majority support from RAs and TAs, GWC-UAW at Columbia SENS-UAW at The New School file petitions with the NLRB to overturn Brown and restore the right to collective bargaining.

2015 The regional NLRB holds hearings on the Columbia and The New School cases.

RAs and TAs at NYU vote overwhelmingly to ratify their (second) first contract, which makes important improvements to pay, benefits and workplace rights.

2016 The NLRB rules on the GWC-UAW petition at Columbia and overturns Brown, restoring the right to collective bargaining for RAs and TAs at private universities.