Vote “yes” for a more democratic and inclusive Columbia!

On December 7 and 8, we have a historic opportunity to establish a democratic voice, build on and secure improvements in our working conditions and create a more inclusive and accessible university by voting “yes” for GWC-UAW as our union.  Joining together with 60,000 other academic workers in the UAW has become even more urgent as president-elect Trump has said he wants to restrict opportunities for international graduate students and has attacked science by asserting that climate change is a “hoax.”

After nearly three years, including thousands of conversations and numerous town halls among RAs and TAs, we have a clear choice.  Voting “yes” means Columbia would have a legal obligation to negotiate RA and TA conditions with GWC-UAW and to commit any agreements we reach, regarding improvements or maintaining current benefits, into a binding contract.  We would move beyond the current system, where Columbia decides unilaterally whether and how to address problems like late pay, unstable medical and dental benefits, deteriorating lab facilities, or ineffective recourse for sexual harassment, just to name a few examples.

While RAs and TAs have already identified a long list of issues to address in bargaining, check out these five basic reasons to vote “union yes” on December 7 and 8.

Our universities do better when we join together

Joining together in GWC-UAW since 2014 has helped lead Columbia to offer a number of improvements to RA and TA conditions.  But Columbia can still do better, and experience at other universities shows that collective bargaining enhances the power and the creativity to win improvements to pay, benefits and rights for all RAs and TAs and especially those who need it the most, like when RAs and TAs negotiated a 38% increase to minimum stipends in the first-ever union contract at NYU. 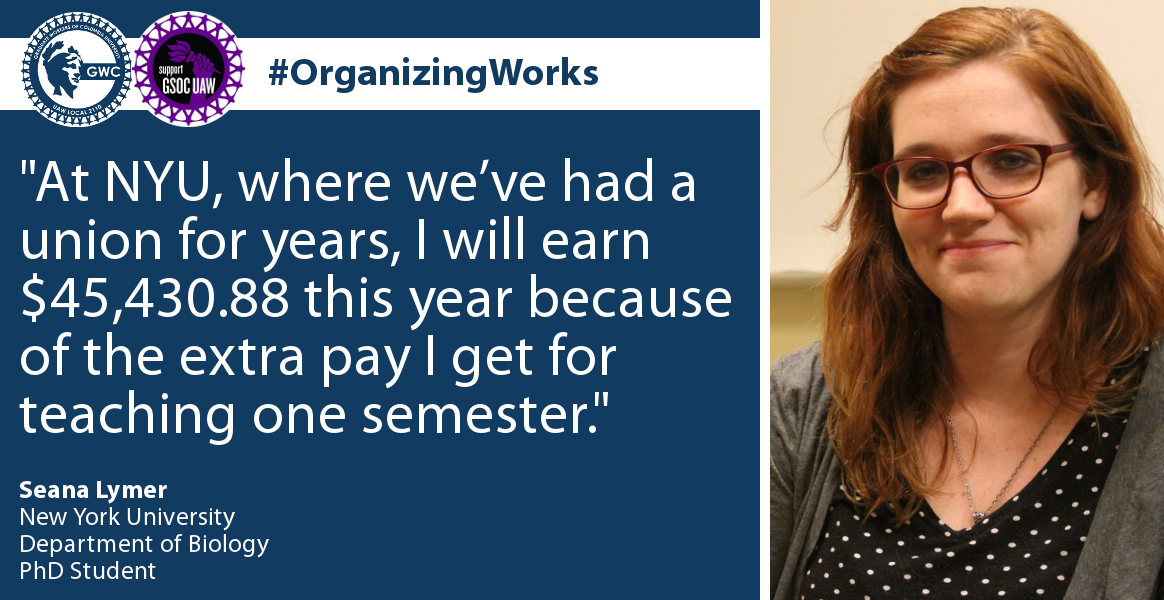 Improved and secure conditions enhance the quality of research and teaching

We all care deeply about research and teaching, which is why we came to Columbia in the first place.  Unfortunately, the unpredictability of our conditions from year to year and the lack of clear, effective recourse – having to spend hours as an individual trying to get paid by the university, waiting for the University to repair faulty lab facilities, or finding out at the last minute that the comprehensive dental plan was eliminated – all get in the way of focusing on our real work.  The clarity, predictability and security of a contract will enable us to make sure that – as the medical school slogan says – “Amazing things are happening here.”

Graduate students deserve a healthcare plan with teeth
Living in Poverty at the Hands of the Ivy League: Why Columbia University’s Graduate Students Need a Union

With 60,000 academic workers across the US, including RAs and TAs, postdocs, and non-tenure-track faculty, the UAW nationally and locally has become a leading voice advocating for expanded opportunities for international students to work in the US after graduation and for robust federal investment in science research.  The UAW also played a key role, alongside others like NIH director Frances Collins, supporting the new federal overtime rules that established significant improvements to postdoc salaries.

Letter to the editor: Voting ‘yes’ for unionization at Columbia to improve the international student experience

While we have won some improvements, until we have collective bargaining Columbia still can and does make changes to our conditions, from neglecting to maintain an adequate dental plan to withdrawing RA or TA appointments at the last minute, and has ultimate authority to decide whether or not to increase pay, improve benefits, or enforce existing policies like maternity leave and childcare subsidies. 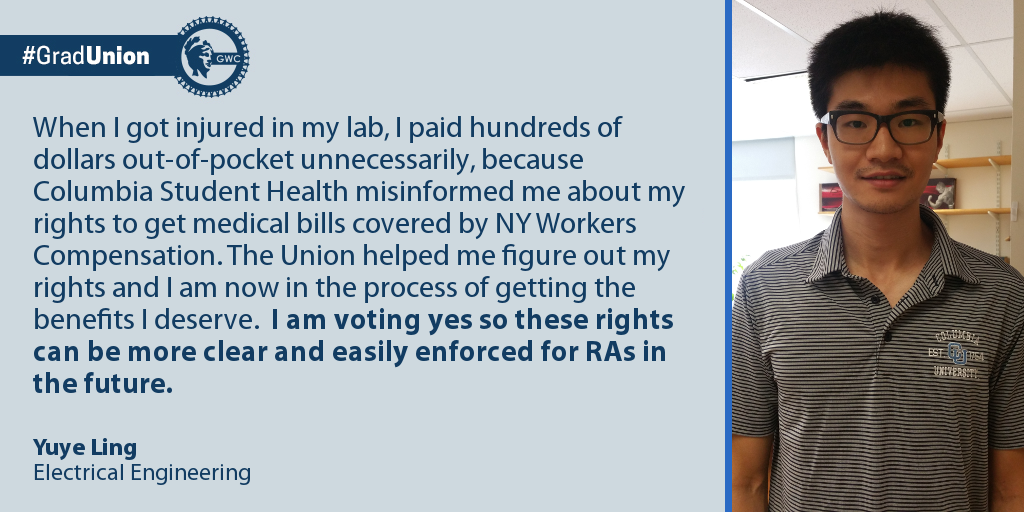 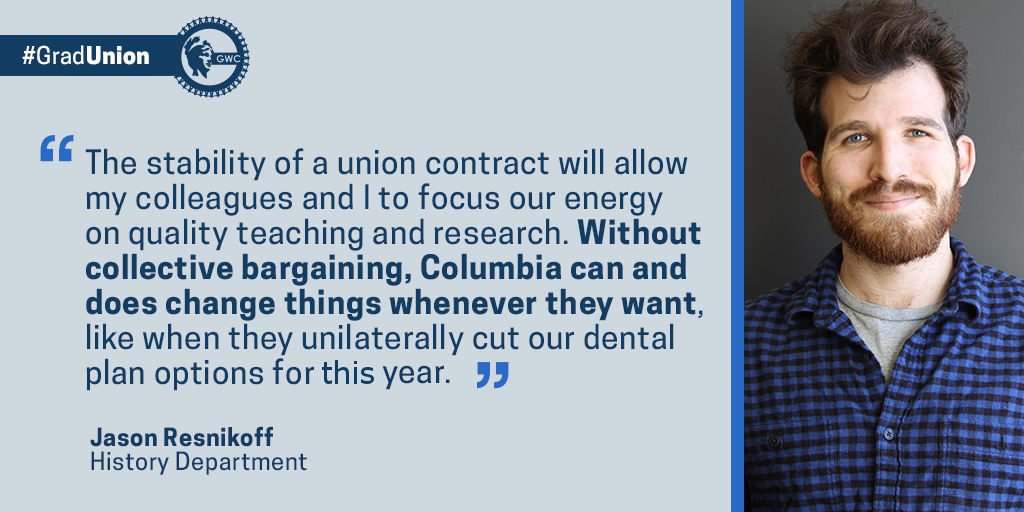 Inequalities–including those based on gender, race and immigration status–continue to create barriers for many of the most talented to enter the academic and scientific workforce.  Though much work remains to be done, RAs and TAs – as well as postdocs and adjuncts – in the UAW have helped make progress on many of these issues, both at the bargaining table and in policy advocacy through the union. 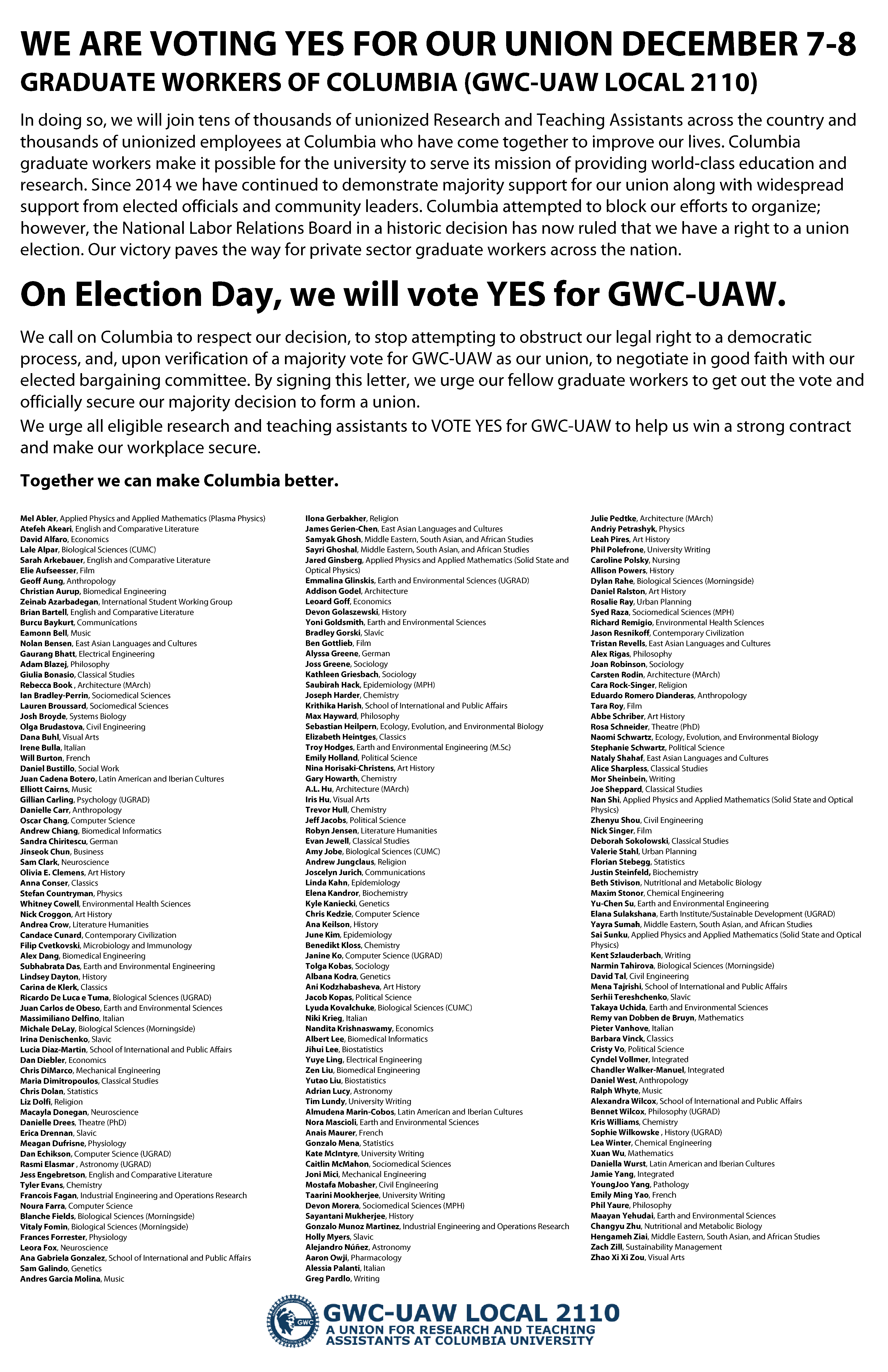