We met with Columbia’s bargaining team again at Studebaker on May 12th to present counter-proposals on Appointment Notification, Appointment Security, Union Access, Vacation, and Holidays and to discuss the status on a number of other proposals we made in previous bargaining sessions.

The session opened with testimony from BB*, a recent PhD graduate from the Communications program in the School of Journalism. Communications is one of the most underfunded PhD programs at the university, offering only three years of student assistant appointments and financial support for their doctoral students. The problems associated with an underfunded PhD program multiply for international students like BB. She was required as a condition of her visa to work only on campus, yet she could only hold one appointment at a time which would pay at most $5,000 a semester. In addition, she also had to provide documentation showing that she earns at least $32,000 a year to demonstrate that she was adequately funded, which she wasn’t. The university did not support her at all in meeting this threshold, and she had to take out loans. Despite some success applying for grants and fellowships to supplement Columbia’s financial shortcomings, BB. could not afford to stay in the US and, against the advice of ISSO director David Austell, was therefore forced to return to Turkey to complete her program during the ongoing political persecution of academics and intellectuals in Turkey and amidst our own Muslim Ban here in the US.

Columbia loves to talk about its open and welcoming community, and its support for international students. However, one cannot help but wonder: is the limit of Columbia’s support for its student assistants strictly symbolic? Was BB’s safety not worth it to the University to back up its words of goodwill with the actual economic compensation that  student assistants need to complete their work? If Columbia is serious about attracting scholars from around the world, they must take seriously our proposal that student assistants in PhD programs be guaranteed seven years of appointments; as well as our proposal for international student workers’ rights and protections. The protections provided in both article proposals would have provided true meaningful support for scholars like BB. As she put it in her statement: Without that kind of support, Columbia campus is not and will not be a safe place for international students.

Soulaymane Kachani, the senior vice dean of the School of Engineering, responded to BB’s testimony with the myopic suggestion that if BB. had known that she would only receive three years of funding, why would she accept the offer from the Communications program? Angela, also in Communications, clarified that the problem is that it is fundamentally wrong for Communications students to receive fewer appointments and less support than Graduate School of Arts and Sciences (GSAS) students who perform the same work. Noura (Computer Science) also reminded the university team that GSAS already says that it funds PhD student assistants for five years and that it would not be a monumental task to provide the same guarantee for other doctoral students.

Soulaymane was convinced this is “impossible” and that the school endowments do not have the money to afford to fund all their PhD students. When Noura told Soulaymane that we do indeed believe that the university has the resources to do better, the dean of GSAS, Carlos Alonso, revealed why the bargaining team of a multi-billion dollar institution believes they can’t afford our proposal. “Do you know how much money GSAS gets from central administration? Zero. When it comes to the financing of graduate education, there is no Columbia.” The deans argued that the budgets for staffing and funding are managed by each school separately and complained that we don’t understand “the financial limitations” of financing education. We were not convinced by this argument. Noura and Dominic (Sociology) raised the point that “Columbia” seems to have enough money to litigate against its student workers in sexual harassment cases and to hire union-busting lawyers to continue to avoid providing workers the benefits and pay they deserve. This same union-busting lawyer then admitted that Columbia’s central administration does provide funding for “school-wide matters”, just not for financing “graduate student education”. Helen (Philosophy) encouraged the deans to review their salaries if they are so strained for money.

Rather than find common ground, the University’s team simply kept asserting that “There is no Columbia,” not even to provide a safety net for when the funding of individual departments and schools falls short. They suggested that because student assistants work across schools and colleges with distinct budgets and administrators, “there is no Columbia” to commit to improvements that would benefit all 3,000 workers represented by the Union, as if Columbia is somehow different than the dozens of universities all across the US that have agreed to fair improvements in contracts covering equally diverse groups of student assistants. We believe there is a Columbia and we will continue to demand that they commit to guaranteed appointments and tangible support for international student workers.

Columbia’s bargaining team was less contentious about our Travel and Workspace & Materials article proposals and we are starting to see some positive changes in their counter-proposals. However, Columbia maintains their insistence on limiting our unit to only doctoral students who work as teaching assistants, graduate research assistants, and departmental research assistants. The university also offered the first proposal on the table about compensation that simply proposes maintaining the status quo on compensation. Both proposals were rejected. 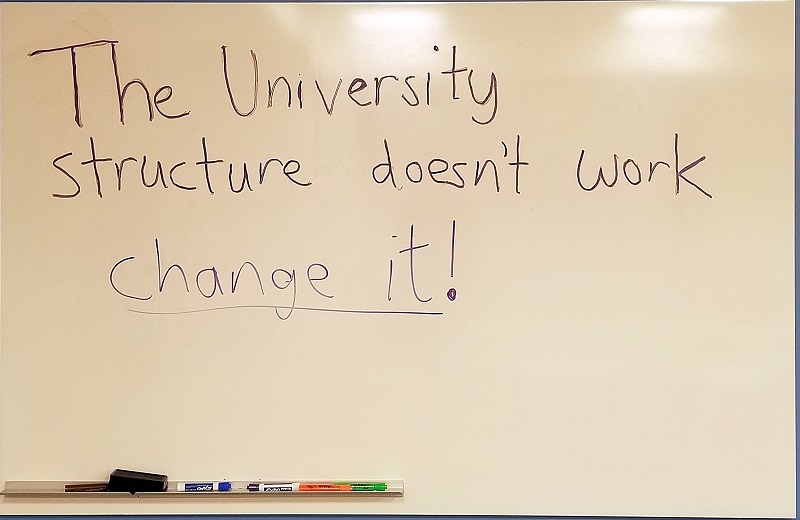 Our next bargaining session will be June 21st 9:15AM-12PM in Lerner Hall, Room 569. As always, please continue to send us your stories about how any of the issues we’ve discussed are affecting you in your workplace. We are also collecting information about how Columbia’s recently proposed changes to our health care affects student workers across our unit. Please follow the link and fill out the form.