Sexual harassment and assault happen far too often at universities like Columbia. And, as recent high-profile cases remind us, our university’s existing mechanisms for addressing these cases have too often failed to achieve justice and will likely become even weaker under the Trump/Devos administration.

Unfortunately, by refusing to respect our overwhelming 72% yes vote for our union, the Columbia administration is blocking our ability to negotiate real recourse and protections against sexual harassment and assault, through a grievance procedure and neutral third party arbitration in a union contract without the risk of repercussions and damaging our academic careers. Their refusal to bargain undermines our democratic rights as well as the true potential for gender equity in the academic workplace. 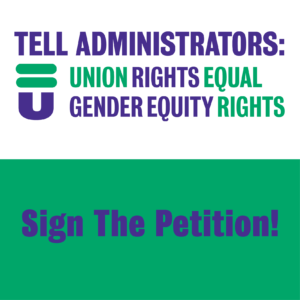 We need to remind our administrators of the significance of these problems.  In a recent article published in Science Magazine former graduate students at Boston University have alleged serious serial sexual harassment by their advisor roughly two decades ago. The fact the one of them waited until she had tenure to report sexual harassment during graduate school speaks for itself. Tell Columbia that we don’t want to wait decades to achieve real recourse for sexual harassment survivors—sign our petition calling on Columbia to bargain a contract now.