Join the Graduate Student Advisory Council (GSAC) and Graduate Workers of Columbia (GWC-UAW Local 2110) for a day of action against the Tax Reform Bill. We’ll have snacks and material to call, tweet, and email our Congressional representatives to make our voices heard. 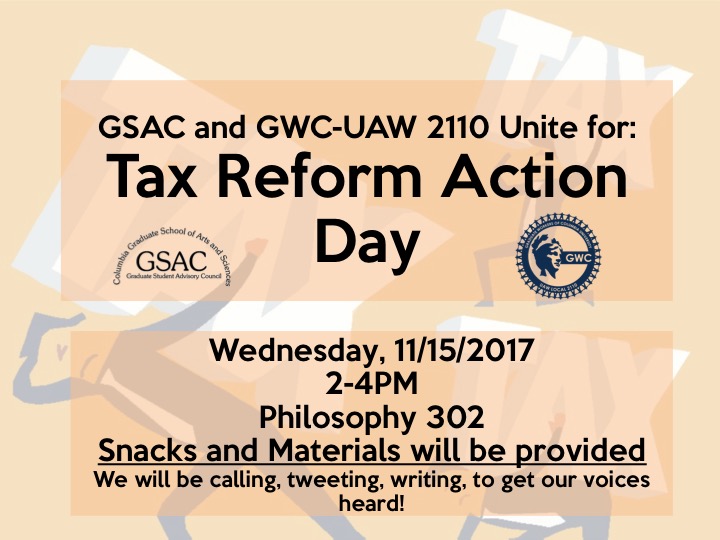 The Trump/Republican tax bill would have devastating effects on working people and our families. The proposal to eliminate the tax exempt status of our tuition waivers would more than double the taxable income of most RAs and TAs. This change would undermine affordability and accessibility of graduate school, thus cutting against the idea of a just and inclusive university that we fight for as a union.

While we continue to speak with our elected leaders we’re also speaking with media about the potential impact this proposed plan will have. Check out what our colleagues had to say in Inside the Higher Ed “Graduate students and higher education experts warn GOP plan to tax tuition waivers would be disastrous to both students’ finances and institutions’ teaching and research missions” and Artsy “Why Graduate Students Are Worried about the Republican Tax Plan”. Our UAW Region 9A director has also released a statement here.